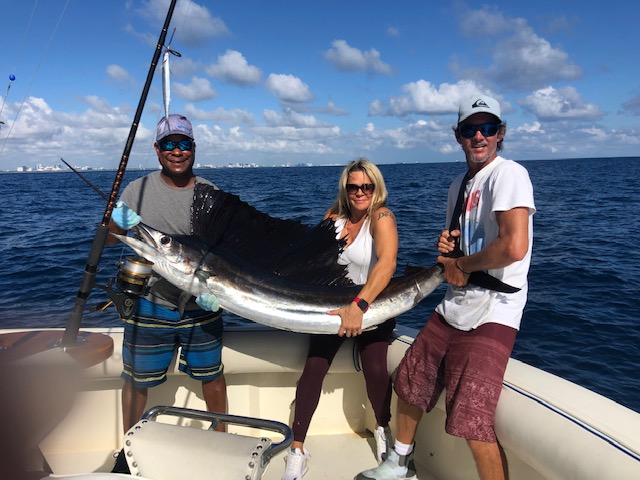 We had a nice family looking to target a Sailfish out of Fort Lauderdale so I went to the drawing board to make a plan for the day .  Considering the time of the year being winter and January one of the better months to target Sailfish we were excited to accomplish this for the group.  Conditions are important when deciding what, when and how to fish for Sailfish . That day we had very light wind with little current, so the option to kite fish with live bait was scratched off the list . Trolling dead Ballyhoo is a good method but the most effective is live baiting for them.  So I decided to fish live Ballyhoos.  Sails already are laser focused on feeding on the hoos and when presenting a spread of livies if there is a Sail within close proximity they will absolutely feed.  We headed out of Bahia Mar in Fort Lauderdale tuna fishing where we are docked.  It is a short ride to the inlet and within 15 minutes we already turned the corner and started heading to the mooring balls where we catch live Ballyhoos.  The mate quickly gets us connected to the mooring ball and with the chum bag in the water a large school of Ballyhoo showed up.

We use light line with very small hooks and a tiny piece of squid to catch them and just like that we had a live well full of bait and ready to head off searching for a Sail.  I ran down to the Southern waters of Fort Lauderdale where fishing can be very productive and there is good reef and bottom structure, often having clean bodies of water moving through.  The mate rigged up the spinners with light leader and circle hooks, we were also fishing a teaser which is an artificial strip of hologram baits.  I started fishing them on the shallow side of the drop off.  There are no fences and these fish will travel up in the shallow flats searching for Ballyhoo.  The mate staggered the baits with one center shot gun bait, two long and two short baits and one positioned behind the strip teaser.  The spread of baits looked killer and now we just needed a fish to come along.  I slowly moved the baits along the reef and went from the top of the reef, along the drop off and out to deeper water.  The mate was continually changing out baits as needed as well as clearing them off of any weed.  We recently had a cold front move across the state and whenever we have a cold front the Sailfish bite turns on, these fish are migrating South and the front will move a body of fish through the Fort Lauderdale fishing grounds.  Sometimes we will see the bite turn on the next day and other fronts it will take a few days.  I moved the baits out to 200 feet of water where there was the slightest movement of current.  Once I got into the current we started to see some fishing action.  The first bite was a double header and was a pair of Black Fin Tunas.  On light line and spin tackle was a fun fight, the anglers got the fish along side the boat and the mate gaffed them and put them into the box.  The mate sent back out two fresh Ballyhoo.  Next we got a nice rigger bite, the line came down hard and the anglers started fighting the fish and it turned out to be another nice Black Fin Tuna.  There certainly was some life along this edge and we were still in search of the target fish.  The area started looking better and better as now there were some frigate birds circling above us.  Frigate birds have 6 foot wing spans have excellent eyesight and can spot a fish from a mile away. in Fort Lauderdale tuna fishing we got another Tuna explosion on the surface and the anglers had the program down and jumped on the rod and got the fish in the boat, as we were preparing a bait to send back out, all of a sudden a Sailfish pops up behind the strip teaser.  Right behind the teaser was the fresh and happy Ballyhoo.  The Sailfish crashed the Ballyhoo and started swimming away, the mate fed the Sail and then hooked him up.  The angler got the rod in the stand up fighting belt and starting fighting the Sailfish.  This fish made a bunch of runs and jumped all over the ocean.  One of the coolest things to watch is a full grown Sail going berserk.  After an exciting fight on stand up spinner tackle the angler was able to get the Sailfish safely along side the boat.  The mate reached down and brought the Sailfish in to first remove the hook then a quick photo before releasing the fish.  Everyone had an awesome day on the water with an amazing finale and now it was time to head back to the marina.  If your looking to book a fishing charter contact Capt. Dave Zsak with Top Shot Sportfishing Charters and the “Happy Day Today”. 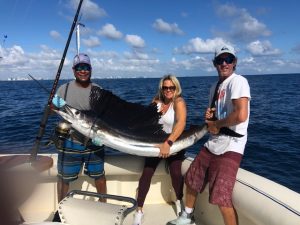