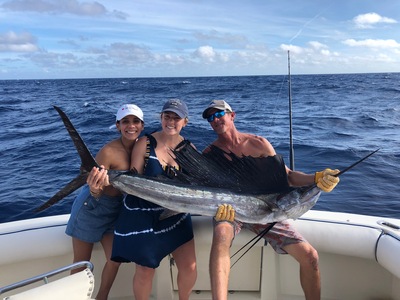 I do like targeting Sailfish but its not always the best fish to target especially when Sails are not coming through the area.

Of course that’s not to say you wont get the Sailfish bite, only mentioning if there has not been much action with Sailfish over the last few weeks or so the chances may be a little less than desired. We were starting the day with action somewhere in the middle and enough success to tilt the scales and just go for them.

Had a nice group who wanted to catch a fish of a lifetime as well as get some good fishing action. I decided to start the day at the swim buoys, they are located in shallow water which is right over a North and South reef structure which holds Ballyhoo baitfish.

We pulled up to the swim balls and tied up, with the steady shaking of the chum bag and within 10 to 15 minutes just as expected the Ballyhoo baits swam up to the back of the boat. The first mate got a cast net and with a solid throw we had plenty of baits for our Fort Lauderdale sailfish adventure.

Now with baits in the well we were off to start slow trolling the reef in 75 feet of water. Its a good starting point as we will work off to deeper water getting our baits out to 400 feet of water then back into 100 and a lot the the time concentrating in 150′.

The rigs we use are light mono with circle hooks and either a cocktail straw or copper wire to attach the bait to the rig. We’ll fish a spread of two long, two short, one shotgun and a flat line live bait. Plus we like to have teasers in the water, there is the ever attractive strip teaser and or the squid chain (sometimes using the live ballyhoo chain).

We worked the baits down the reefline and avoiding any weed patches. The first fish we caught was a 15 pound Bonita, it crashed on the live bait, put up a good fight and it was put into the fish box and will also be put to good use as a cut, strip and or bottom bait.

Baits back in the water and we continued working the reef. All of a sudden we had two Mahi Mahi swim into the spread and crash on the right long and right short bait and we had a double header on.

Both Mahi’s jumping and pulling drag we were fighting them on light spinning tackle and they put up a great fight, one at a time they came in and the first mate reached out and gaffed the Mahi and they went into the box.

I was working the baits out in 200′ of water and finally we saw the target fish. A Sailfish fishing out of Fort Lauderdale will put a smile on anyone’s face, with a semi doral and bill out of the water and trying to eat the bait, the Sail took a shot and ate the bait.

We fed the Sail and soon as we reeled tight the he started jumping out of the water. Our anglers began fighting the fish as the mate cleared some of the spread leaving a few out (trying for the second bite). With some good air action this fish put on an awesome show.

We got the Sailfish up along the side of the boat, pulled it in for a quick photo and back in the water and after a successful revival the Sail swam away.

The group had a killer trip as we did and it was time to head back to the dock at Bahia Mar. To book a deep sea fishing charter contact Capt. Zsak at (954) 439-8106 and we can arrange your fishing adventure.