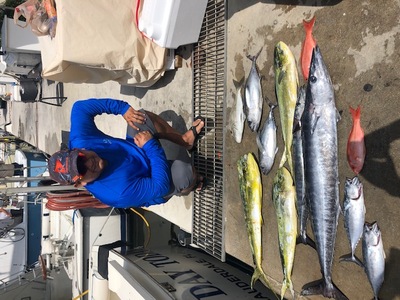 In Fort Lauderdale sightseeing charter we had a group of 6 guys down from North Carolina looking to fish offshore and target some good eating fish aboard the charter boat Happy Day Today with the Top Shot Sportfishing Team. The weather was nice with light easterly winds and a couple of foot chop up on the sea.

As we were heading out of the inlet, the first mate was rigging up the tackle for Black Fin Tuna. We’ve been seeing both a morning and afternoon Tuna bite, and they have been feeding anywhere from 100 feet of water out to 500 feet of water. Once we came off a plane, the guys sent out the trolling lines, both surface and deep baits.

I worked the drop offs and headed over sunken wreck structures. We got a nice strike on the planner line, and the angler brought in a Tuna. Then on the outrigger, we caught another two nice fish. The Tuna bite was better the day before, so we decided to change tactics and head offshore in search of Mahi Mahi. We got out about 6 miles offshore and found a nice weed line with a few birds diving. As soon as we made the turn on top of the birds, the rigger line came down, and we had a Mahi Mahi on the line. The first mate had a Ballyhoo on a spinner and casted it out quickly, coming tight on another fish.

After catching the two Mahi’s, we continued trolling down the rip heading south into the current. Suddenly, the deep planner line started ripping offline. The angler got on the Penn 50 International and started fighting the fish. After some fast runs and zipping off drag, the angler got the fish closer to the back of the boat, and up came a nice Wahoo. The mate started wiring the Wahoo in; he reached down, gaffed the Wahoo, and put it in the fish box.

I turned the boat heading back to the area where we got the bite and saw a floating board, which was what the Wahoo was on. We made a few passes in this same area, hooking another Mahi. The angler fought and caught this fish; the mate gaffed and put in the fish box. We continued down the rip, and after a few more passes with no bites, we thought there weren’t any more fish, but then the planner line got a strike. We caught another Wahoo, not as big as the first one, but still a nice fish.

The last stop for the day was to try for some Snappers. The mate rigged up a 5-circle hook rig with fresh cut bait. I headed to a wreck structure; the guys dropped down the rig, and we caught some Vermillion Snappers.