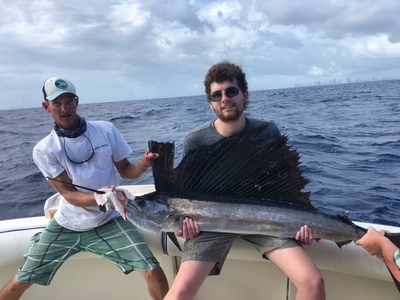 Today we had long time repeat customers and friends who booked the Top Shot Sportfishing Charter Team for the morning fishing charter out of Fort Lauderdale on Fort Lauderdale deep sea fishing with  the Happy Day Today.

They have fished with us for over the last two decades and, as always, we were very excited to have them back out with us.

We left the dock and started heading offshore. Our goal was to have fun, fish hard and catch fish. The seas were 2 to 3 ft. with a southeast wind.

Recently, we have been catching some Black Fin Tunas and Mahi Mahi’s, so that is what I was hoping the anglers would catch.

The Tuna bite has been pretty good in both the morning and afternoon, catching what we call football sized fish. T

hey move along the coast anywhere from 100 to 500 feet of water; the Mahi’s have been mixed in shallower depths out to the Swordfish grounds. We started with two deep planners and four surface lines trolling the reef.

The first fish we hooked was a Barracuda on a sea witch. It was a decent sized fish, and after a quick picture, we released him. I trolled to the south in 200 feet of water and started seeing some Tunas jumping.

I started working the area, marking the fish below us and shortly thereafter we got our first Tuna on the surface lure. My angler was Gabe, and he did a great job. The first mate gaffed the Tuna and got him in the boat and on ice.

We continued fishing Fort Lauderdale, working the area for Tunas, and proceeded to hook and catch another 4 Tunas, all about the same size. Bleeding the fish is best for quality.

I wanted to get out to deeper water and try for Mahi Mahi. When fishing out of Fort Lauderdale, I will continue heading off in search of some fish looking for a weed line, floating debris, or birds. Once I got out to 750 ft. of water, I started seeing plenty of flying fish and birds in the area.

Suddenly, the rigger line came down and we had a Mahi on. Sofia was my angler, and she did a superb job. We ended up catching a total of 5 Mahi Mahi’s, and a few were undersized, which we released. I started heading up to the north fishing a broken weed line.

All of a sudden, the long rigger line came crashing down and up came jumping a full grown 7-foot Sailfish. Jackson was my angler; he put on the fighting belt and fought the Sail.

The Sailfish put on an awesome show, jumping out of the water at least a dozen times. After an exciting battle, the Sailfish was up and alongside the boat; the first mate reached down and pulled the fish in the boat. We removed the hook, and after a quick photo, the Sailfish was back in the water and swam away very healthy.

Now it was time to head back to the dock, and after a short run, we entered Port Everglades in Fort Lauderdale.

To book a fishing charter or if you have any questions about what is biting, contact Capt. Dave Zsak at 954-439-8106.