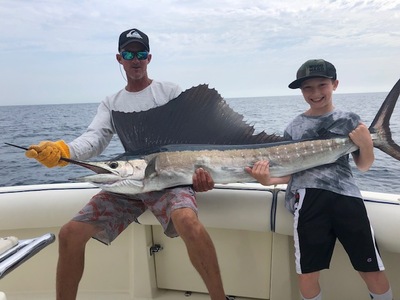 The Top Shot Sportfishing Charter Boat team fished a 6-hour morning charter on Monday with Ben and his son, Garrett, from Philadelphia on the Happy Day Today charter boat.

The first bite came pretty quick, and it was a Black Fin Tuna we hooked on the deep planner line.

The Tunas have been biting good in waters ranging from 100 out to 500 feet of water.

It’s best to locate birds, color change or a current edge, then mark the fish on a depth sounder. I started getting Tuna bites for Ben and Garrett on a blue and green color change in 150 feet of water while heading offshore off Fort Lauderdale then back in over the rip.

We continued to catch Tuna with some Bonita mixed in the bag – most of our bites came on swimming Ballyhoo and sea witches.

I could see an oil slick offshore from where the Tunas were biting, and I trolled the baits into the spread.

As soon as they hit the slick, the right long rigger bait came crashing down, and we hooked a Sailfish. Garrett was the angler, and he did a great job fighting the Sailfish.

After a 20-minute fight, he had the Sailfish alongside the boat ,The first mate brought the Sailfish into the boat to remove the hook, took a quick picture and successfully released the Sailfish to swim away.

We continued fishing for Tunas and caught a nice number of fish for the guys. We wanted to make a change in our fishing method and show the guys some bottom fishing, so we picked up our lines and headed to a sunken shipwreck.

This artificial reef is a container ship that was intentionally sunk many years ago for recreational fishing. We used a two-pound lead with a 20’ long leader and a circle hook. The first mate rigged up a live bait, and we slowly sent the bait down to the wreck.

The conditions were ideal with a light north current. As soon as the bait reached the bottom, the rod started to bend over, and we had a fish on.

The guys started fighting the fish, and after some good runs and pulling drag, we caught a large Amberjack. We vented the AJ letting the air out of his stomach, took a picture and released the fish.

Now, it was time to head back to the dock after a fun day fishing Fort Lauderdale. To book a deep-sea fishing charter, contact Capt. Dave Zsak at 954-439-8106