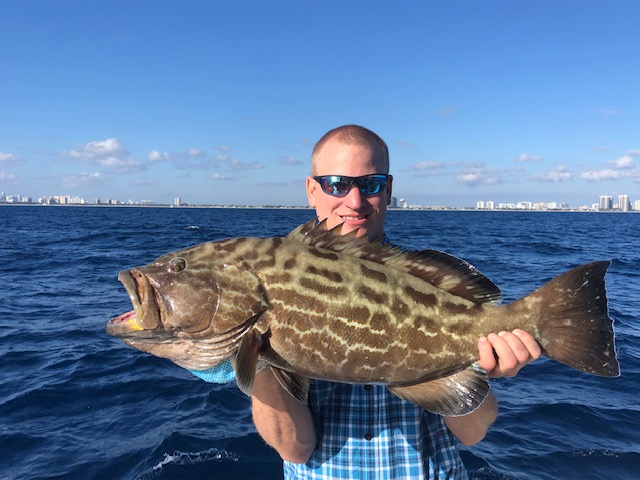 In Fort Lauderdale deep fishing We had a new customer book us for a half day of fishing aboard the “Happy Day Today” which is a 52′ Hatteras sportfish.  The guys were from Wisconsin and this was their first time down in South Florida looking to have a fun day offshore and bring some fish home to eat.  We departed from our marina at Bahia Mar and within 20 minutes had lines in the water beginning our morning fishing charter.  I started the morning trolling which is a good way to get a feel for the conditions for the day.  For example is there a currant and which direction is it flowing, how is the wind affecting the water and are there any schools of bait in the area.  Bait is important as of course the more bait one can assume more fish that will feed on them.   The first lines in the water were two deep planner lines, these lines get down anywhere from 40 to 60 feet depending on the size of the planner.  Any fish that is feeding in a deeper column will find and feed on the planner lines.  The bait we used can in Fort Lauderdale deep fishing be anything from a spoon, strip or ballyhoo.  The next couple lines we fished were rigger lines.  They are connected to the outriggers and when a fish strikes they will release with the line coming tight off the tip of the rod and fish on.  I was fishing in 150′ of water right off a nice blue and green edge which is where two currents meet, bait and fish will travel along this edge.   The deep planner line had a strike, it went off and we hooked a nice fish.  The guys got behind the rod and started fighting the fish and they hauled up a nice King Mackerel.  We continued on trolling along the edge and we ended up hooking another couple King Mackerels on the deep planner line.  The Sea Witch was the most active bait and with a Bonita strip bait it is almost irresistible to a fish.  The next bite was a larger than normal hit with the line peeling off and again the guys got behind the rod and started fighting the fish.  It turned out to be a nice 4 foot shark.  The mate brought the fish in the boat and carefully removed the hooks before releasing the shark.  We practice catch and release with all sharks and want to continue to preserve the shark fishery, when possible using circle hooks which will find the corner of their mouth and can easily be removed. 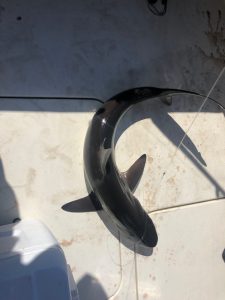 I continued trolling down the edge and once we got to deeper water I could see some birds diving which is a good sign of activity and action on the surface of the water.  Birds make excellent markers for where the fish can be and usually are, a lot of times when we troll near where the birds are diving we get strikes.  Soon as we got out to 400 feet of water the two deep planner lines went off and we ended up hooking and catching two black fin Tunas.   I worked the area in hopes of finding the school again but as Tunas will migrate down the coast they will surface then go back down and by the time they are resurfacing they may be a half mile away.  I was heading to a wreck structure, this structure is a sunken ship wreck which was sunk over 50 years ago and it continues to produce great catches.  Baitfish will congregate in and around the wreck attracting other life suck as Groupers, Barracuda, Amberjack and Snappers.  We continued trolling towards the wreck searching for birds, surface activity and weedlines.  Floating debris and weedlines are excellent homes to smaller baitfish and Mahi Mahi will hang below a nice floating raft of weed or jetsam.  Once we arrived to the wreck we had a nice current which was heading to the North at about a know of current.  When wreck fishing is always best to have average current, too much current is not always the best case as it makes it difficult to accurately fish the bottom and over compensating with heavier lead does not always help to properly fish the wreck (but can help).  The first mate rigged up a live bait that we had caught the day before.  I have the best success with live bait and rigging them with a circle hook through the eyesocket will not harm the bait and allow him to freely swim around the wreck as natural as possible.  Soon as the mate hit down to the bottom of the wreck with the live bait he reeled the bait up around 20 cranks to ensure the bait does not entangle with the sunken structure.  Within just a few minutes of the bait being on the wreck the rod bent over and we had a nice one on.  Line started peeling off and our anglers started fighting the fish.  After a nice battle the guys brought up a nice Grouper. 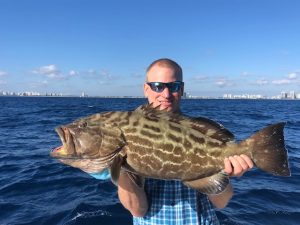 We put down the same rig and just as before sent the bait down but this time on the way down we had a strike.  Line peeling off the reel and we had another nice fish on.  The angler started fighting the fish and we hauled in a nice Barracuda. 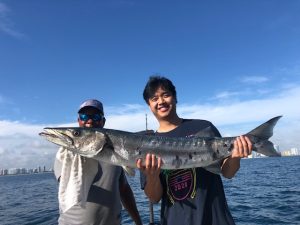 Now it was nearing the end of the charter and it was time to pull up the outriggers and start heading back to the inlet where the boat is docked at Bahia Mar.  The guys had a nice ride home sitting on the couches and in the air conditioning aboard the 52′ Hatteras.
If interested in booking a deep sea fishing charter contact
Capt. Dave Zsak
(954) 439-8106
topshotfishing.com
“Happy Day Today”