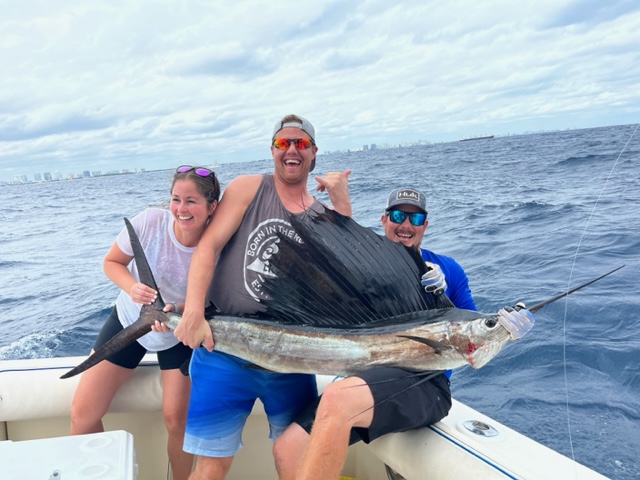 Fort Lauderdale fishing report with two Sailfish and two Mahi Mahi on a half day four hour fishing charter.  This fishing was aboard the Happy Day Today which is a 52′ Hatteras and Top Shot Sportfishing Charters.  We headed offshore with a full trolling spread with two deep planner lines and four surface naked rigged Ballyhoo baits.

The deep planner lines are fished with a long leader of 60-pound test to a baited sea witch. The naked Ballyhoo baits are rigged with a lighter leader and a quarter-ounce chin lead with either a circle hook and or a j hook depending on the method. The conditions for the day were 1 to 3-foot seas with a knot of current heading to the North.  The mate started putting the lines in the water soon as we reached the blue water at 100 feet.

I continued trolling offshore and noticed a floating object surrounded by weed and of course trolled the baits past the float.  Soon as we passed the area the rigger line came crashing down and we had a Mahi Mahi jumping out of the water.  It’s always exciting to see the green of the Mahi as well as the size of the fish, the bigger they are the harder they fight, and this one is a good one.  After a strong fight, the fish was alongside the boat and the first mate gaffed the fish.

I made a turn coming back to the area and we hooked up to another Mahi Mahi.  After another great battle the fish was gaffed and into the fish box. 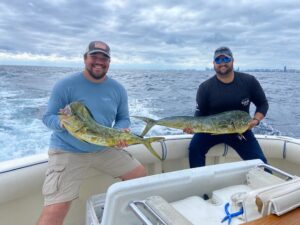 We then trolled offshore heading out to deeper water all while concentrating on the depth sounder looking for marks.  Additionally searching the skies for bird activity.  We reached 500 feet of water and the deep planner line got a strike.  The angler got on the line and started fighting the fish which turned out to be a nice Black Fin Tuna.

The current off Fort Lauderdale was moving up the coast which increased the chances for pelagic fish.  This is also the time of the year Sailfish start migrating down to the South.  The Sailfish bite has been getting better as we head into winter. 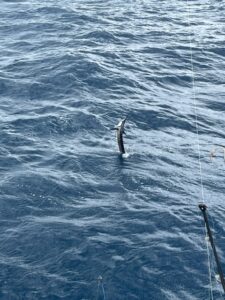 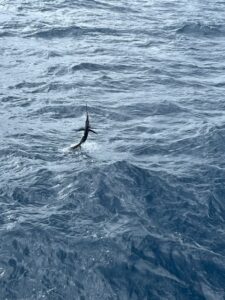 The four best methods to target Sailfish in no specific order. 1 Kite fishing out of Fort Lauderdale using live bait is an excellent way to target Sailfish.  Staying in one position and moving the boat as needed to keep the depth and kites where desired.

Using extra light kites to extra heavy kites means just about any wind speed we can use fishing kites. 2 Slow trolling dead Ballyhoo is another excellent method for targeting Sailfish.  Slowly trolling the baits over different depths and areas, a deadly spread of Ballyhoo is hard to resist for a Sail.

3 Slow trolling live bullet bonito.  They make an all-around great bait for all species such as Wahoo, King Mackerel, Hammerhead, Mahi mahi, and Sailfish among others.  4 Slow trolling live Ballyhoo.  The only thing better than dead-rigged bait is live bait.  This method allows movement of depth from shallow to deep narrowing down the bite.

However, this is condition-specific and calmer conditions are preferred.  So now back to fishing in Fort Lauderdale.  I could see an edge forming in 200 feet of water where the current and water color slightly changed.  We trolled the spread of baits along the edge and it didn’t take long before we had a Sailfish up in the spread. 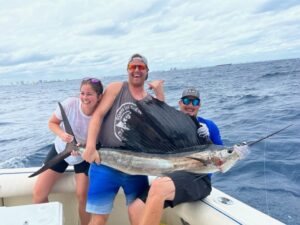 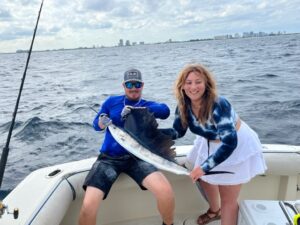 The bill of the Sailfish was behind the bait and feeding on the Ballyhoo.  The first mate fed the Sailfish giving him some line then coming tight to hook up the fish.  The Sail ran with determination and jumped out of the water multiple times.

After an awesome battle, the angler was able to raise the fish up alongside the boat for a quick picture and safe release back into the water.  We resumed trolling the edge in 200 feet of water and shortly after we had the full spread of baits in the water we had another Sailfish up in the spread.

This Sailfish hit a few baits then we hooked him up and the Sailfish started jumping.  The angler did a great job angling the Sailfish to the boat.  We quickly removed the hooks and released the Sailfish back into the water.   After a great day fishing in Fort Lauderdale, it was time to return back to the dock. 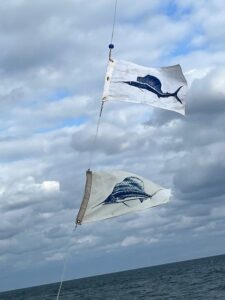