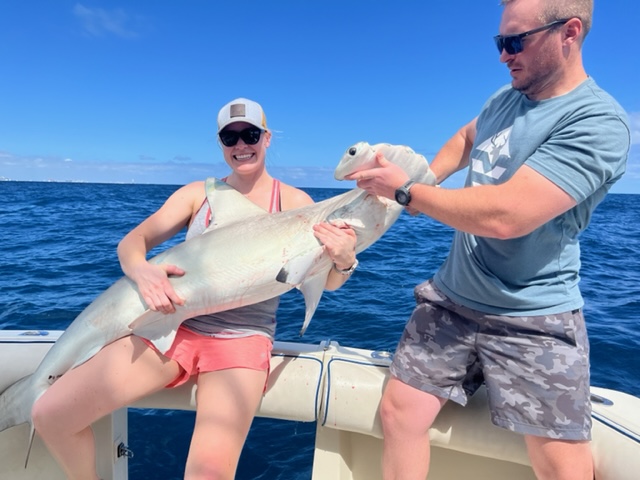 Fort Lauderdale fishing report for our Fort Lauderdale boat charter in “Happy Day Today” and Top Shot Sport fishing Charters based out of Bahia Mar.  Tony, Zach, Hanna and Kenna were down from Wyoming and on vacation in South Florida.  They were looking for some larger fish so we decided to put out the big game spread.  I think they were completely fine with just hanging out, having some drinks and listening to music on water but I wanted to put them on a memorable fish.

We left the dock around 730 and started heading offshore aboard the “Happy Day Today” – 52′ Hatteras sportfish.  We had great conditions with a cool breeze, limited clouds, a small chop and some North current which always gets the fish moving.

I would have liked to start fishing offshore on Fort Lauderdale charter boat searching for Mahi Mahi but the bite has been off some .  With just a few reports of Mahi Mahi around just not enough to justify heading 6 to 8 miles offshore Fort Lauderdale.

We had a live well full of Ballyhoo so I slow trolled live bait from 100‘ feet of water out to 400’ of water with no success.  I was hoping to find a Sailfish. Live Ballyhoo are excellent baits and when sailfish are moving through the area they will not pass up a frisky bait.  However when I slow trolled them out to 400 feet and I located a nice body of current and it was moving at a knot of current to the North.  A steady knot of North current makes for good conditions for targeting Hammerhead sharks.  Also the depth is just right as well. It’s on the deeper side of the shelf and these fish will travel along the drop off.Hammerhead sharks have excellent sensory and can detect movement and blood from a far distance.  They are strong fighting fish and an angler can take anywhere from a half hour to an hour or more to bring one in depending on the size and tackle.

We set up a spread of two kites.  One kite kicked out to the right and the other to the left.  The kite line has release clips and the tension is set to release when a pound of pressure is applied. I fished three live Goggeleyes and one dead bait. Kite fishing gives a surface presentation of the spread of baits.
I also fished a bottom rod with a dead bait with larger tackle to handle some of the sea monsters that cruise along the shelf.   We use a wire rig with circle hook and a couple pound lead to get the bait to the bottom .  With the bow of the boat facing into the wind and putting the boat in gear to hold depth.  The mate rigged up a bridle for the live bait which exposes the hook and will increase the chance of setting the hook.

We had our spread of baits in the water and soaking for about an hour maintaining the height of the gogs .  Then all of a sudden a large dorsal fin came out of the water and the Hammerhead shark fed on the dead bait.   Angler Hanna set the hook and then started fighting the T head.  The mate cleared the bottom rod first getting the deepest line up and into the boat.  The Hammerhead started running offshore and Hanna got into the main fighting chair.  We cleared a few lines and kept a few in the water so we can continue to fish the live baits and sometimes we will get a second fish on.

She was using a TLD 50 with 100 pound braid and a light action rod which is a great match for a six and a half foot shark.  She battled the shark and whooped it’s tail in about 40 minutes. 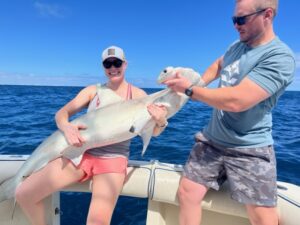 Hanna was able to bring the Hammerhead up along side the boat, because of the hook placement right on the corner of the mouth we carefully removed the hook, got a quick photo and safely released the shark back into the water.  I repositioned the boat after fighting the fish getting back in the zone and we continued kite fishing and put the spread back out.  We still had a knot of North current and the water color was electric blue.About 45 minutes later we were sliding to the North and Kenna screamed out shark.  I looked out and there was about a 5 foot Hammerhead shark chasing one of the live baits.  First came to the short right bait, tried eating the bait frantically chasing the bait before losing sight and totally missing it.  Next the shark headed diagonally across the spread of baits towards the right long bait.  This time he got the prize and sucked down the live bait.  The angler was Kenna and she set the hook and started fighting the Hammerhead shark.

She did a great job angling especially since she was fighting this 5 footer with a Shimmano TLD 30 with a light action rod.  It also took her about 45 minutes of angling before she got the shark along side the boat.  We were able to get the hook out, took a few pics and safely released the shark.

If your looking to book a fishing charter or have any questions about what is biting contact Capt. Dave Zsak with the charter fishing boat “Happy Day Today” and Top Shot Sportfishing Charters at (954) 439-8106.