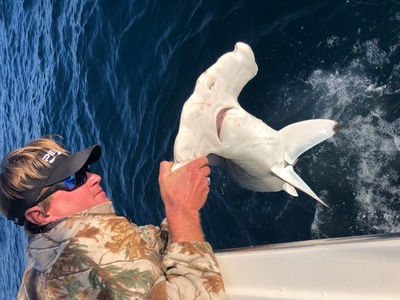 Fort Lauderdale fishing report for the Happy Day Today and Top Shot Sportfishing.
Willy and Josh from South Dakota chartered us last week for an afternoon fishing trip from 1 to 5pm.

The guys wanted to target sharks and knowing this before they booked the trip I have been saving up plenty of Bonita for shark bait. We left the marina at Bahia Mar located in Fort Lauderdale, FL and headed out of the inlet in search of some big fish.

The first mate rigged up three baits that we fish on the surface, a middle depth at 150 feet and one bait on the bottom around 300 feet down. I headed about two and a half miles offshore the Fort Lauderdale inlet and found an area with some current and good starting point to target sharks, I slowed down the boat and we were ready to start fishing.

The first mate rigged up a surface bait with a 24 foot leader and a float to keep the bait suspended on the surface, this bait goes out about 30 yards. The second bait set out about 15 yards from the boat and down in the middle water column.

We also float this back keeping the spread close to the boat yet staggered from each other. The mate rigged the third and we drop this bait to the bottom and reel it about 25 feet off the bottom so it would be off the ocean floor not to hang on any reef. Once everything was set we were waiting patiently for the big bite. The first mate continued to cut bait and periodically would throw a handful keeping a strong chum slick going.

It took us about an hour before we had our first shark bite, the rod bent over and started pulling out drag just for a second and the fish was gone. We gave it a few minutes and checked the bait and everything was cleaned off. Ok so baits back in the water and we continue fishing Fort Lauderdale waters for sharks. Same as before the first mate throwing a handful of cut bait into the water chumming up the waters.

Then we saw a nice sized Hammerhead come cruising into the spread of baits. He circled around the boat but wouldn’t feed. We pitched him a fresh cut Bonita slab and nothing, he swam right past it. Eventually he left the spread and disappeared.

Exciting to see the Hammerhead up close and swimming around the boat and very frustrating he wouldn’t feed. About five minutes later the middle float started to disappear under the water and this only happens when something is pulling it down, I yelled down to start reeling on the line. At the same time the boat started to move ahead and we do this to set the hook. We had a nice one on and Josh started fighting this shark.

He did a great job angling and after a 20 minute fight the Hammerhead shark was along side the boat. We carefully removed the hook and after a quick picture we released this awesome fish. We set back up in the same spot since we had soo much chum in the water and time invested.

I figured why leave an area that we had already seen one shark and caught another, maybe there will be a third one lurking around. We had the three baits back in position in no time and back to chumming the waters. The current is heading to the North and all these fish are traveling South into the current and this is where they are picking up the scent of the baits.

All of a sudden the 8/0 Shimmano Tiagra started ripping off drag and we had him on. Again the guys started fighting this shark. After another 20 minute fight we had another Hammerhead shark alongside the boat. Same as before we carefully removed the hook and after a quick photo we released the shark and he swam away in excellent condition.
To book a deep sea fishing charter contact Capt. Dave Zsak at (954) 439-8106