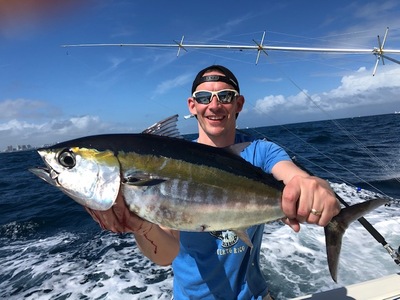 We have had a productive month targeting pelagic species. The Mahi Mahi bite recently showed some promise with a few days seeing 4 to 5 fish. Some days the fishing out of Fort Lauderdale can be slow for Mahi Mahi and some days are good and it really depends on the conditions and the schools of fish moving through the Fort Lauderdale area.

Whenever we have a steady East wind the Mahi Mahi are pushed closer to the beach and all the fish traveling 4 to 10 miles offshore are closer to the reef and we are finding them in 100’ to 300’ of water just a few miles off the beach. We have been catching them on surface lures, Ballyhoo and deep planner sea witch baits.

The last time I was trolling for Mahi Mahi we found a couple birds working and fished our spread of baits close to the floating debris and the birds. A couple lines came down and we were fighting Mahi Mahi, fish on!!

Whenever there are trailing fish behind the hooked fish be ready to cast a jig or bait for multiple hook ups. This happens more than you realize especially when you’re not ready for them. Also sometimes when keeping one fish along side the boat in the water the rest of the fish in the area will stay long enough to cast a line.

Another good technique is when kite fishing with live bait to have a chum bag in the water occasionally tossing cut bait in the water. Packs of Mahi moving through the area will get pulled into the slick.

Black Fin Tuna have been showing up in both the morning and afternoon charters having better success earlier in the day and later in the afternoon. Having better Tuna action whenever it’s overcast and cloudy.

The schools of Tuna will run up the reef and when they turn on with the right current, wind and water temperature we’ll see awesome action with every line hooked up. Trolling at a faster speed will help increase the Tuna bite.

Looking for birds diving helps locating the schools of Tuna. Also the Tunas will sometimes move along a current change and when we locate the blue/green edge or weed line trolling the offshore side will prove successful.
In addition we are also catching some Barracuda and Bonita mixed in. The two methods we use to catch Barracuda are trolling lures and live baiting. For best results we use a wire treble rig with a stinger. Slow trolling the baits over a wreck using a down rigger ball we’ll send the bait down to the top of the structure carefully not to snag the wreck and more often than not the release clip will snap and fish on.

The more common fish hanging around the wrecks are Amberjack, Barracuda, Grouper, Snappers and Sharks. Using the wire rig is advantageous to keep the fish connected.

So far in February and now into March we have had ideal fishing conditions in Fort Lauderdale. Light to medium easterly wind with some North current. These conditions allow us to live bait kite fish, offshore trolling and wreck fish. To book a deep sea fishing charter out of Fort Lauderdale give me a call to discuss fishing options, availability and what’s biting.