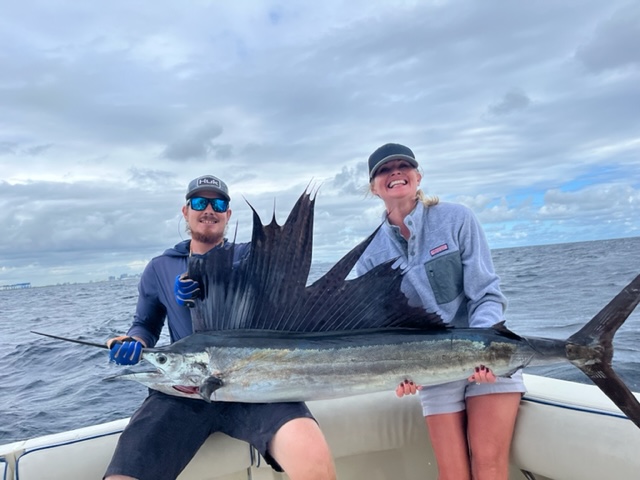 To start our morning we had good weather, partly cloudy skies with light easterly wind and comfortable temperatures.  The seas were about a 2 foot chop which can be a favorable sea condition.  I always prefer some wind and current for the more productive fishing charters out of Fort Lauderdale.  The guests wanted to target edible fish so we set out to find them some Tuna and Mahi Mahi.

We boarded the Happy Day Today a 52 foot Hatteras sportfish located out of Bahia Mar in Fort Lauderdale. The first mate started ringing up fresh Ballyhoo which are my favorite trolling baits.

First I started looking for Tunas breaking the surface and soon as I found some evidence of them I had the first mate start getting the lines in the water.  We fished a couple bridge teasers, two short Riggers, two long Riggers along with a deep planer line.

The mahi-mahi bite has been pretty good this October.  The key to finding the fish is finding either a floating object, a weed line or birds working over an area.   But first we were in 200 feet of water working the deep side of the reef.

The first hit came on the long planner and like I suspected it was a Tuna.  Nice fish, in the box and good start to the morning. Tuna will travel along the reef and we catch them anywhere from 100 feet out to 600 feet of water and this day i was seeing them crashing in 200 feet as well as marking them on the sounder.  I continued working the area and another bite came on the long rigger.  The angler got on the rod and started fighting the fish. Soon as the Tuna got close to the boat the first mate reached down and gaffed the Tuna.  We continued working the area searching for more tuna but I was not marking them on the the depth sounder or crashing on the surface. 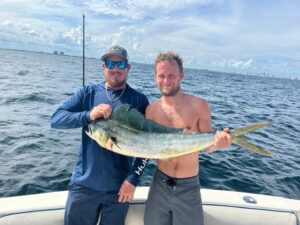 I started heading east and offshore looking for some signs of life. Signs of life can be anything from birds to weed lines to current.  Anything that will hold a group of fish to an area and most times it’s because of the baitfish. It could be a very obvious sign such as a thick weed line running north and south.  Or something small as a single floating stick.

We made it out to 800 feet of water and this was about the time we found a small group of weeds. Soon as we passed it we got a strike and had a Mahi Mahi on.  The angler got on the rod and started fighting the fish.  When the Mahi got close to the boat the mate was ready to cast a live bait to any Mahi that were following but no luck.  Back to trolling in the same area.  We made a pass back through the area and two strikes with a double header Mahi Mahi.  As the anglers were fighting the fish we were ready again with live baits and this time there was one following up behind the fish.  Casted out a bait and got hooked up to a Mahi Mahi on spinning tackle.  We continued this and picked up a few more fish before leaving the area.

The nice thing about fishing in Fort Lauderdale is that the close proximity to the inlet, wrecks and structures to fish.  Whenever we have a plans to change our fishing method, whether it’s fishing for Sailfish, Mahi, Snappers,  or sharks we have a very short distance to travel to target the species.

We had some time left in the charter so after a short run we started fishing again in 150 feet of water.   As we were trolling the reef I was seeing a lot of baits or flying fish.  Again always a great sign and whenever possible fish the baits.

I looked back and saw a Sailfish behind the Ballyhoo on the short rigger bait and quickly called down to the anglers to get ready.  The Sailfish was behind the bait thrashing his tail back and forth in attack mode.  The angler was ready, first feeding the Sailfish then engaging the drag hooking him.  The fish ran off a lot of line and with a lot of speed came jumping out of the water.  This fish gave us a lot of acrobatic jumps.  After a fun fight the angler was able to get the fish along side the boat.  The mate reached down and removed the hook, a quick picture then back in the water for a successful release. 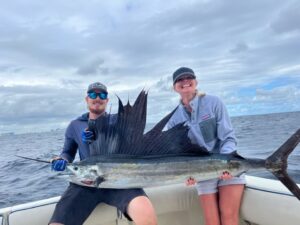 Contact Capt. Dave Zsak at (954) 439-8106 with any questions about what is biting, details about the Fort Lauderdale fishing charter or to make a reservation. 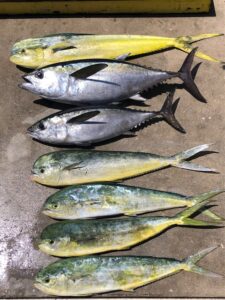