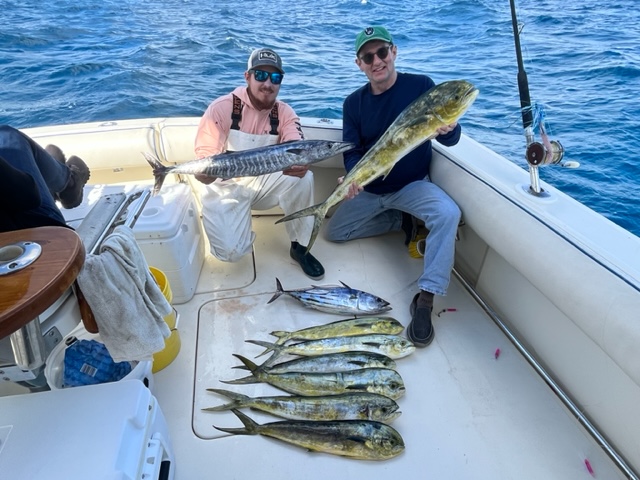 Fishing in Fort Lauderdale has been bountiful with a wide range of exotic species in the latter part of December.  We ended the year of 2022 strong and coming into 2023 has already proven to be a productive first week with great kick off to the new year.   The fishing charters I have been offering have ranged from live bait kite fishing, live bait bullet Bonito fishing, offshore fishing, inshore reef fishing and wreck fishing in Fort Lauderdale.  Winter time in South Florida offers cooler temperatures ranging from the 60’s to the 80’s maintaining 70 degrees for the past few weeks.  The wind has been averaging 15 mph out of the East with a couple foot chop.  This equals good fishing conditions and we have been targeting Mahi Mahi, Wahoo, Sailfish, Shark, Black Fin Tuna and Snappers.

12/26
Emre chartered the “Happy Day Today” with his family and they were down from Chicago.  It was the day after Christmas and the temperature was a chilly 50 degrees.  We decided to live bait fish in Fort Lauderdale along the drop off in 150 feet of water.  First we caught the live bait, these baits are called Bullet Bonita and they will congregate on and around any structure such as a sunken ship wreck, sea bouy or along the reef.  Soon as we caught the live baits the first mate rigged up the live bait and the spread of baits consisted of two long riggers, two short riggers and one down rigger line.  Once the live baits were deployed I fished them along the drop off shallow as 100 feet of water and out to 200 feet of water.   Shortly after we had the spread of baits in the water I could see a Sailfish chasing one of the live baits.  After taking a few attempts on the live bait the Sailfish ate and we had a Sailfish on and pulling drag.  Always a great way to start out a fishing charter especially with one of the most sought after bill fish.  The angler fought the Sail and was able to reel the fish along side the boat where we removed the hook, pulled the fish in for a quick photo and released the Sailfish. 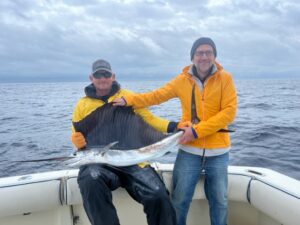 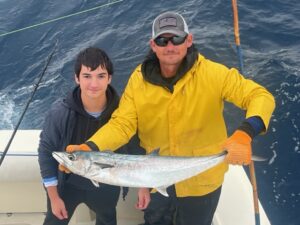 Back to fishing with the spread of live baits in the same general area.  One way to tell when we are about to get a bite is the live bait will start to swim frantically and the rod tip will start to vibrate.  The down rigger rod will drop down then pop up after the fish has eaten the live bait.  The drag is set light and the clicker starts to scream off.  We started to fight the fish and after a great battle the fish came up and the first mate gaffed a nice sized King Mackerel.  At this time we were out of live bait so a quick trip back to the wreck and we caught more live bait.  Now with a full spread of live baits back I continued working down the drop off fishing in Fort Lauderdale.  I could see an edge forming in 120 feet of water.  This is where two currents meet and bait fish as well as predator fish will travel along these edges.  We lined up our baits along the offshore side of the edge and it did not take long before a full grown 8′ Sailfish exploded on one of the live baits.  Rigger clip snapped out and the line started screaming off the reel.  This fish started jumping out of the water what looked like 10 feet above the water line.  These fish put on a epic show and after 30 minutes of we had the fish in the boat, hooks removed and safely back in the water set free. 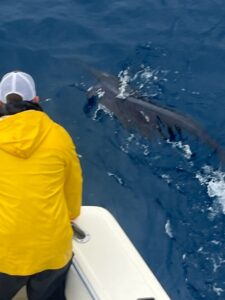 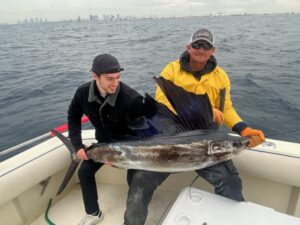 12/28
Chris and his wife booked a deep sea fishing charter in Fort Lauderdale aboard the “Happy Day Today” and Top Shot Sportfishing Charters.  We left the dock at Bahia Mar at 7am and were offshore and fishing by 730am.  We are very fortunate to have fishing grounds just a few miles off the beach.  The first mate had a spread of rigged naked Ballyhoo with two deep planner lines.  We decided to head offshore to deeper water.  The conditions were shaping up good with flying fish, floating debris and birds working in the area.  I was on high alert for Mahi Mahi constantly scanning the horizon for any signs of life.  We trolled out to 600 feet of water and soon as we passed a group of sea weed the rigger line came crashing down and we had a Mahi on.  What a great feeling when you see a nice fish jumping through the spread and the angler fighting the fish.  After a good battle the first mate reached out and gaffed the Mahi Mahi. 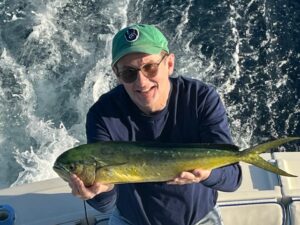 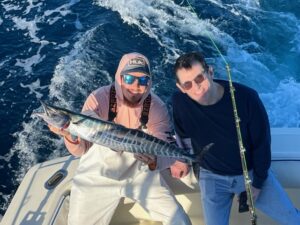 We continued fishing the area making wider turns looking for anything floating.  As we were heading back into 500 feet of water I spotted a floating pallet.  These floating object will primarily have fish but not always.  This pallet had smaller bait fish swimming around it, a few triple tails on the corner and I could see Mahi’s deep in the water column.  The first pass we made the deep planner line got a big strike and Chris started fighting the fish and he reeled in a nice Wahoo. The first mate reached down with the gaff and in the boat and into the fish box.  We continued to troll around the pallet and just about every other pass we would hook a Mahi Mahi.  This was steady action and at the end of the charter we ended up with 7 Mahi Mahi, one Wahoo and one Skip Jack Tuna.  Every day is different out here Fishing in Fort Lauderdale and can drastically change from one charter to the next.  We just hope to find fish on every charter and making decisions on what to target based on the conditions for the day. 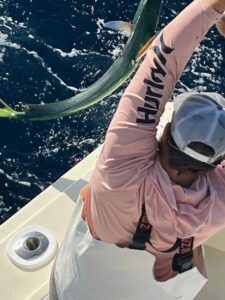 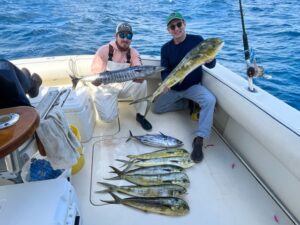