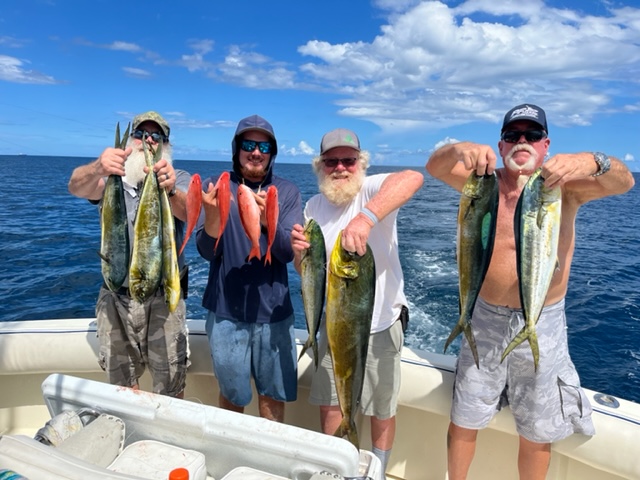 Gene and Gary from Missouri along with Steve from Fort Lauderdale booked a fishing charter out of Fort Lauderdale.   We departed from Bahia Mar with nice conditions for the day with light easterly winds and clear skies.

As we were heading out of the inlet in 50’ of water I noticed some explosions on the surface of the water.  Few birds circling around and this time of the year when the mullet are coming down the beach Jack Crevalle will school up and feed on baitfish along the ledge. The first mate send out some surface lures and just as we were trolling along the edge of the commotion two of the outrigger lines came crashing down and fish on.  Always a good feeling when you’re catching fish within the first ten minutes of the fishing charter.  Both Gene and Gary started reeling in a couple nice Jack Crevalle.

We have been catching some Vermillion snappers and the bite has been a little better in the morning. So before heading offshore and targeting mahi-mahi I decided to go to one of our local wrecks and bottom fish for snappers.  The first mate had some fresh Bonita which makes great Snapper bait, he cut them up into bit size cubes and rigged up what we call a chicken rig, which is a 4 hook rig in line connected to a weight.  Soon as we were on top of the spot the guys started sending down the rigs and as soon as the baits got to the bottom we started getting some snapper bites.  This is great action especially when the fish are biting good and we were hauling over the side both legal and under size snappers.  The legal size is 12” and we do release any of the Snappers that are under size. 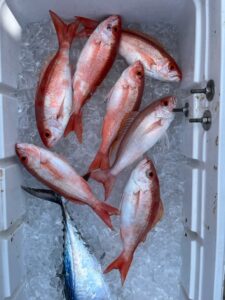 The trolling spread got deployed and we started along the drop off.  The mate sent out four surface lines and two deep planner lines.  As we were heading South and offshore we had a couple strikes on the deep planner line and the guys caught a couple Bonita.  We continued heading offshore and I was looking for weed lines, birds or anything floating.   For almost the entire time we were searching we could not find anything to fish, there were no weeds or anything floating and then we found two rafts of weed about 3 feet by 3 feet.  I had the first mate rig a live Pilchard and toss it under the patch of weed.  Almost soon as it hit the water a Mahi came from under the patch and crashed the bait.   One of the guys started fighting the Mahi and as we were fighting this fish I noticed more fish in the area.  We then started casting out live baits on spin tackle and hooking Mahi.  The guys were taking turns hooking these fish and one at a time the mate was gaffing them and bringing them into the boat.  We then made an approach to the other side of the patch of weed and continued doing the same thing, cast a live bait under the patch.  If these fish are there they do not hesitate and will feed very fast.  We fished this area keeping only legal fish and releasing any fish that are undersize. 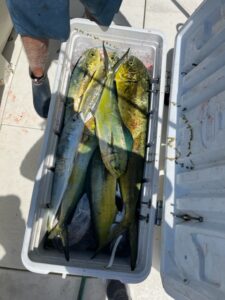 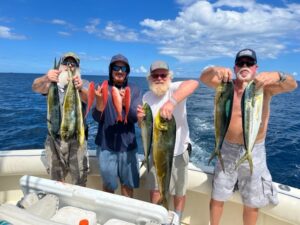 Now it was time to head back to the dock at Bahia Mar located in Fort Lauderdale. To book a deep sea fishing charter out Fort Lauderdale contact Capt. Dave Zsak at 954-439-8106