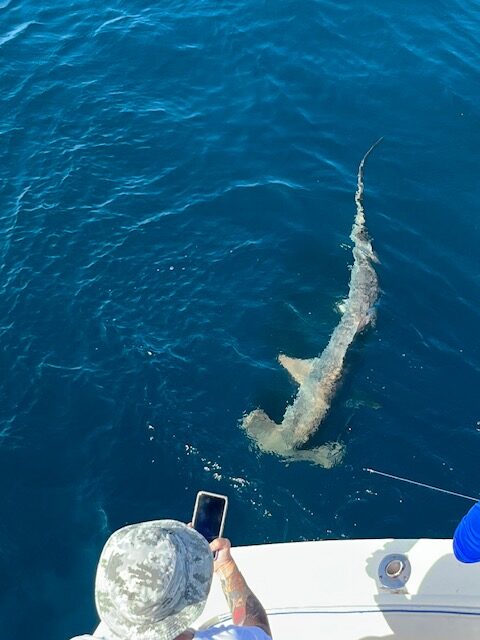 We had an all-day 8 hour fishing charter out of Fort Lauderdale with a group of 5 guys from Wisconsin.  We left the dock at 7:30 AM and it only takes 20 minutes to get out to the fishing grounds, we are very fortunate to have deep water just a mile off the beach.

I started fishing in 100 feet of water where the drop-off starts. The first mate set out two deep planer lines and four surface Ballyhoo baits. We started working over the reef and a drop-off and it didn’t take long before the planner rod got a strike and we had a fish on.   One of our anglers got in the chair and started fighting the fish.  The first fish in the boat was a Black Fin Tuna.

It was a good start to the all-day fishing charter out of Fort Lauderdale because the guys wanted to take some fish home to eat.  I continued working over the reef from 100 feet of water out to 400 feet of water checking for current rips, and weed lines and marking any fish on the fish finder.  We then headed over a sunken shipwreck and about the time we passed over the wreck four lines all got hit at once.

The baits having the most success were surface swimming Ballyhoo two of which were naked Ballyhoo and the other two were skirted.  On the deep planner lines, we were using sea witches with Bonita strips.

Next, we decided to head a little deeper offshore Fort Lauderdale and try to find a couple mahi-mahi‘s for the guys.  I was looking for any signs of birds, weed lines or anything to troll over such as a floating pallet or debris.

The first mate pointed out a couple of birds flying high above so we headed over to the area and as soon as we got there we got doubleheader mahi-mahi.  The guys fought the fish and when they got close to the boat he reached out with a gaff and over the gunwale came the fish.  Continued working the area in 800 feet of water looking for a few more fish and we ended up missing a Mahi, the fish came up jumping and spit the hook.

We continued heading offshore and soon as we found another bird we ended up hooking another two Mahi Mahi, same as before these fish ran off drag and the guys fought the fish, and soon as they came to the back of the transone the mate gaffed the fish and in the boat.

So far this has been an excellent day charter fishing in Fort Lauderdale and the guys had a nice box of fish with 4 BlackFin Tuna, 4 Mahi Mahi and 4 Bonita.  The Bonita are not edible but are fun to catch.

We decided to end the trip targeting a big game sportfish which is exactly what the guys from Wisconsin wanted to do, catch something memorable.

So next we decided to head back to shore and set up in 350 feet of water and try for a shark.   The first mate rigged up two of the Fresh Bonitas with circle hooks. He cut the baits from the tail towards the head removing the tail which we call butterfly bait.  He also set out two kites, one to the right and one to the left.

Kite fishing is a good presentation whereas the baits are on the surface. We fished three live baits and one shark bait from the two kites. The first mate also sent down the butterfly Bonita 325 feet toward the bottom of the reef.  This style of fishing is exciting for all customers because you can see the live bait swimming around and a lot of times you can see the dorsal of the sailfish and or shark swimming up to the bait.

Also with the style of fishing, we are constantly maintaining the live baits to keep them on the surface, not too deep and of course not out of the water.  The best position is a foot below the water line splashing and making a commotion. All of a sudden line started ripping off the shark reel and we had a nice on. One of the anglers got in the fighting chair and hooked himself into the harness and started fighting the fish.

The first mate and I brought in the two kites with all the baits and cleared out the spread. This fish was ripping off drag, diving down deep again and again.  The angler was doing his best to retrieve the line lifting the rod up and cranking on the way down gaining as much line as he could and this continued for 45 minutes.  He did a great job bringing the fish up closer and closer to the boat.  Then we could see “color” which is the fish coming up from the depths of the ocean.

When the fish got close enough the first mate removed the 2-pound lead and started wiring the fish toward the boat. We ended up catching a very nice Hammerhead shark.  We a couple of nice pictures and safely released the Hammerhead shark.  After a great day fishing in Fort Lauderdale, it was time to head back to the dock. 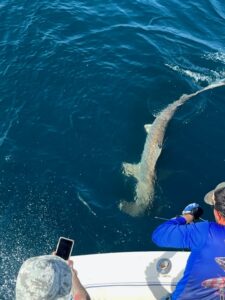 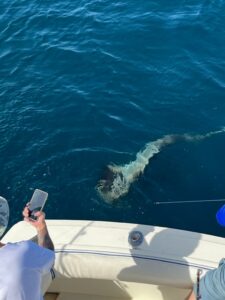 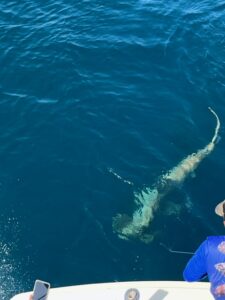