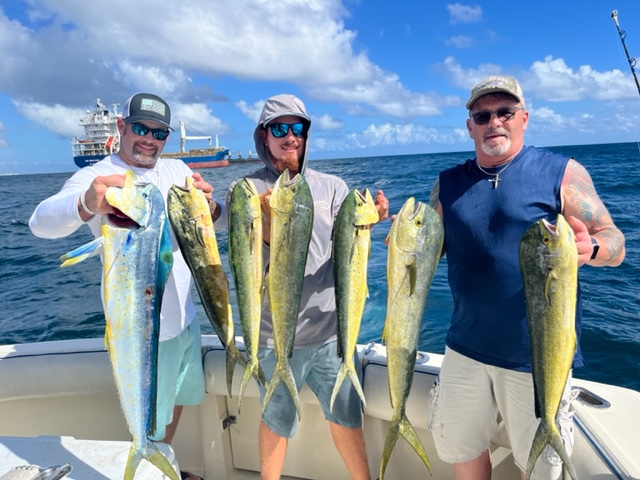 Fort Lauderdale fishing report for Top Shot Sportfishing Charters and the “Happy Day Today” 52′ Hatteras sport fish . Sal and his father Rick from Atlanta, Georgia booked Top Shot Sportfishing Charters for a half day fishing charter out of Fort Lauderdale.  The guys have deep fishing experience and even brought their own rod and reels.  I will add they were good set ups. A 50 wide rigged with 80 pound braid and we fished it as a deep planner line.  The other reel was a 30 and was fished as a rigger line.  Of course we were equipped with all of our own boat tackle.  The guys were wanting to troll for some Mahi Mahi so we were on the look out for birds, weed lines and floaters. 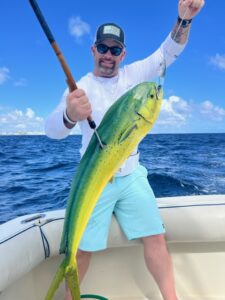 Past week the Easterly winds have been blowing and this helps push Mahi Mahi closer to the drop off. It also forces the weeds and debris closer in from offshore. We left the marina at Bahia Mar around 7am and started heading East.  It doesn’t take long to reach deep fishing water and within 3 miles we started putting lines in the water.  Over the past few weeks we have had good activity relatively close to shore all within 5 miles from the beach.  Keeping an eye on showering baits, birds in the sky and floating debris has been the best strategy when locating the fish.  Some days its easy to find the fish while other days can be very challenging.

The first mate rigged up a bait box full of Ballyhoo.  A few skirted and the rest naked Ballyhoo.  My best success is fishing with Ballyhoo and Mahi Mahi find it hard to resist a swimming bait.  The mate set out a high line, two long rigger and two short rigger lines, one deep planner line and two bridge teasers.  This is a great spread of baits covering all areas in the spread.

Fishing in Fort Lauderdale it is important to be aware of the surroundings.  Something as small as a floating tennis ball could be enough to hold fish and that’s exactly what we trolled across with a hook up.   The rigger line came down and the guys started angling the Mahi Mahi.  I continued down the line in 700 feet of water and every half mile or so we would come across a small area of floating debris and weeds.  Birds were also flying down this same line of scattered weeds. 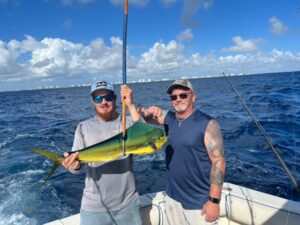 The bridge teasers were raising fish that day.  We had Mahi Mahi swimming up to the teaser.  The first mate was pitching a Ballyhoo and successfully hooking a few Mahi Mahi.  The captain will strip line bringing the teaser away from the attacking fish.  About the same time the mate is sending back a bait and soon as the teaser is ripped out of the water the fish will then turn on the bait and feed.

As we were heading down the line and it appeared to break up.  We would then troll the baits East and West in search of more floating debris.  as well as trolling the baits offshore we came across a nice sized group of weeds and the deep planner rod got a strike.  Sal started reeling in the fish then gaffed him.  We continued working this group of weeds and there were a few more fish we could see in the area.  We were persistent and stayed in the area hooking another couple Mahi Mahi before ending the trip.

By the time , we had great day charter fishing in Fort Lauderdale with Sal and his father Rick.  It was time to head back to the marina.  To book a fishing charter in Fort Lauderdale contact Capt. Zsak at (954) 439-8106 with Top Shot Sportfishing Charters. 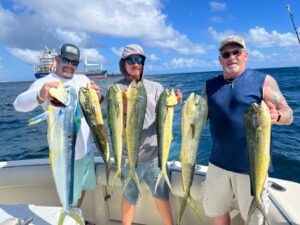