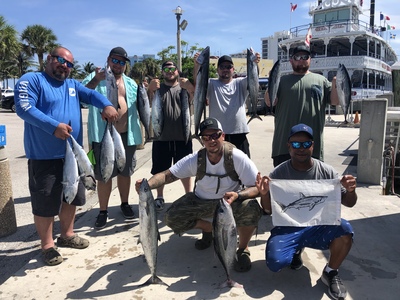 With Deep Sea Sport Fishing We had a great day deep sea fishing with the Vanover Automotive Group from Virginia on board the Happy Day Today with the Top Shot Sportfishing team. The guys were down in Fort Lauderdale on vacation and wanted to catch some fish and have fun.

We left Bahia Mar and started heading to the fishing grounds, located just a few miles off the beach. Nice conditions for the day, with 12 mph of easterly wind and a light north current, which is ideal for fishing.

The trolling spread consisted of two deep planner lines with sea witch lures and a strip bait and surface rigger lines with swimming Ballyhoos. We started trolling over the drop off, which is located in 150 ft. of water.

We had early success hooking and catching King Mackerels and Bonitas trolling the reef. As soon as the planner got hit, the guys started reeling until the planner came up to the surface, then we removed the planner and gaffed the fish, putting it right into the fish box. I worked out to deeper water finding some Black Fin Tunas. They will school up and sometimes we get two or more on at once. We are fishing a spread of lures that will also attract Sailfish and Wahoo.

I continued working the reef heading north from shallower water to deeper water, keeping the guys busy. They were taking turns bringing the fish in and having a great time.

Next, I decided to put out a kite spread. I stopped the boat, positioned the bow into the current and put two kites up in the air with live baits. Also, I put a bottom rod down with a dead bait in hopes of hooking anything hunting on the bottom.

We didn’t have to wait too long before a Hammerhead Shark showed up to one of the surface kites’ baits. The Shark fed, and the angler was ready to set the hook. The Shark ran off a lot of drag, and after a good fight, we were able to bring the Shark alongside the boat, remove the hook and successfully release the Hammerhead.

We went back to kite fishing with the same spread of baits, and it didn’t take long until another Hammerhead Shark, about the same size, came up and fed on one of the live Goggle Eyes. The angler fed the fish, again coming tight and hooking the Shark. This fight was a little bit longer, as we were fighting the fish on lighter tackle. Once alongside the boat, we removed the hook and released the Hammerhead Shark.

We cleared out the kite gear and started trolling in deeper water at a faster speed, hoping to hook a Wahoo; they will hang on the deeper side of the drop off. We got a couple of planner bites, which turned out to be Bonita and Tuna.

Now it was time to head back to the dock. The guys did a great job on the day’s fishing. When we arrived back to the marina, we cut the Tunas and King Mackerels at the filet table for the guys to enjoy for dinner.