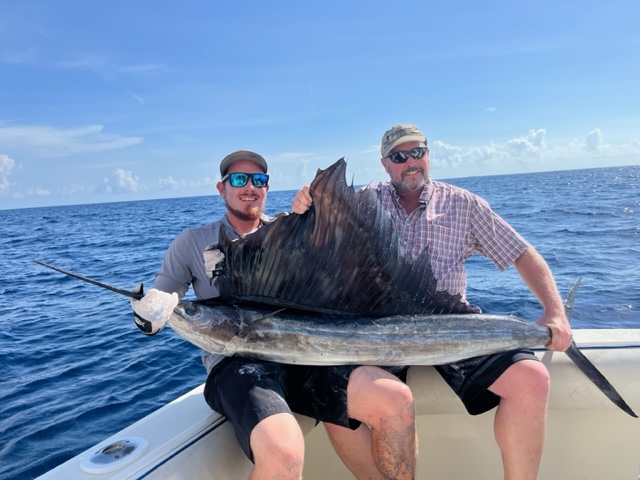 More than halfway through December and heading into Christmas the weather is cooling down making the conditions very favorable for fishing in Fort Lauderdale.  Easterly winds are pushing species closer to the fishing grounds and the water current is moving along the reef stirring up the bite.

We have some options when deciding what fish to target for the day.  To mention a few methods.  If the wind is blowing, live bait kite fishing might be a good option.  Flat calm seas with no wind blowing another good method would be live bait Ballyhoo fishing.  These decisions are made based on the time of the year, what migration of fish are moving through the Fort Lauderdale fishing area as well as wind and sea current conditions.

The site is constantly changing and we do our best job to stay on top of what is going to be the most productive method for each and every fishing charter in Fort Lauderdale.

The Wahoo bite for the month of December has been good and we are catching these fish anywhere from 100 feet of water out to 500 feet of water.  A full trolling spread of two deep planner lines with a rigged Ballyhoo and a sea witch along with a spread of surface baits.

The two deep baits are the favorable Wahoo baits yet occasionally catching a Wahoo on the surface baits.  Additionally targeting any pelagic species such as Sailfish, Mahi Mahi, and Tuna.  We trolled from shallow depths to deeper water fishing over the drop-off and over sunken shipwrecks.  These fish will congregate around structures, especially the ones that have live bait around the structure.

We trolled the spread of baits over the structures and the long planner line got a big strike.  Soon as we got the strike the first mate backed off the drag because the line was coming off the reel soo fast that we did not want to break off this nice fish.  The angler then got in the main fighting chair and started fighting this fish.  A classic Wahoo bite will give 2 to 3 very hard and long runs that almost never seem to end.  And every minute of the fight constant attention to how the fish is being fought and the position of the boat.

After a good battle, the angler was able to bring the thrashing Wahoo to the side of the transom and the first mate gaffed the Wahoo and in the boat.  This was a nice one and measured 60″ and weighed 50 pounds. 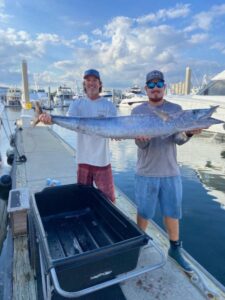 During the winter months, we have been catching bullet Bonito and using them for live bait.  Bullets can be found on the shallower side of the reef and they travel in large packs many times we catch 4 to 6 at the same time.   The mate will put the baits in the live well then one by one start sending them back out rigged up staggering them with one fished on a downrigger.
I will slow troll this spread of baits over the reef in 150 feet of water back and forth over a wreck and reef structure. It didn’t take long before the downrigger line got hit and the Smoker King Mackerel started screaming out drag.  Soon as this happened the angler grabbed the rod and started to fight the Smoker King.  We were using light tackle and this makes for an awesome fight when angling a bigger fish.  Soon as the first mate had his gaff shot the Smoker King was brought into the boat.
Considering we were over the shelf and a wreck was just inside of where we caught this fish we stayed right in this area and the mate sent back out another spread of baits.  I started to slowly troll the baits back over the structure and one of the outrigger lines started to run hard in one direction.  Whenever this happens keep your eyes on the bait and you will see an explosion of water from a predator fish annihilating the bait.
The only thing left was a hole in the water, the line ripped out of the rigger clip and the line came screaming off the reel and we could see it was a full-grown Barracuda.  These fish are for sport and fun to catch, after the angler had an awesome battle the first mate removed the hooks and released this fish back into the water. 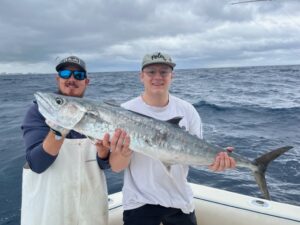 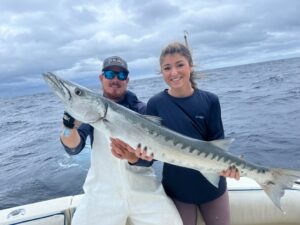 Another good method is offshore trolling.  Fishing a spread of baits during the winter months can produce a variety of species.  This is a picture of a Sailfish caught while trolling offshore.  We were fishing in Fort Lauderdale in 500 feet of water when we could see this Sailfish behind the spread of baits.  Its bill was out of the water trying to eat the swimming Ballyhoo.  After feeding the bait to the fish we then hooked up to the Sailfish.
These fish are purely for sport and are considered one of the most prized to catch. After removing the hooks we released the fish back into the ocean and swam away.  Fishing in Fort Lauderdale offers a variety of different methods and species of fish to target.  Join us aboard the “Happy Day Today” a 52′ Hatteras for your next adventure. 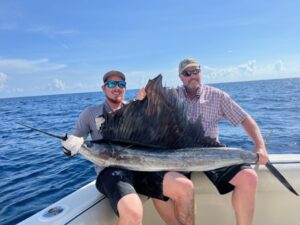 To make a reservation for a deep-sea fishing charter in Fort Lauderdale contact Capt. David Zsak at (954) 439-8106