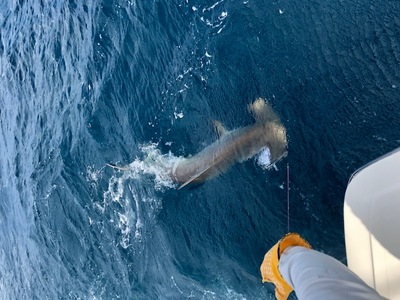 We left the dock at Bahia Mar Marina in Fort Lauderdale around 7:30 am and headed offshore to our Fort Lauderdale sea fishing with a group of longtime friends, who were looking to catch some fish and have a great time.

We started the day at the sea buoy in 115 ft. of water putting out a couple of deep planner lines with sea witches and strip baits and four surface baits. Fortunately, the seaweed was not too unbearable with some scattered patches. I was trolling in 130 ft. of water fishing over the drop off and back over the reef. There has been some good action to the south, and we headed that way.

The first bite was on the planner; the rod came up and started bouncing, and we had a fish on. As soon as the angler brought the planner up, we removed the planner, and we reeled the fish to the back of the boat, at which time the first mate reached down and gaffed the King Mackerel. I continued to work the area, and we caught a few more King Mackerels and some rigger strikes, which were Bonita – not edible but they make for a fun catch.

Next, the guys decided they wanted to try for something larger, so we decided to so some live bait fishing with some dead bait as well. There was just enough wind to fly a kite; the wind was blowing 10 mph, so we sent out two light kites with a combination of live and dead baits. We also sent down a rigged Bonita with a circle hook, and I cut the bait in half releasing the blood and oil.

We had the spread in the water for about half an hour when we got a big bite on the dead bait. The rod bent over, and the drag started ripping off – the fish pulled off 50 yards in no time. The angler was able to turn the fish around, working the fish back towards the boat. After a 45-minute fight, a big Hammerhead Shark came up to the surface. The first mate grabbed the leader and wired the Hammerhead to the boat. We were able to safely remove the circle hook and after a couple of quick pictures, we released the amazing Shark.

It was now time to head back to the dock after a great morning fishing. The guys were very happy with the catch and got some great memories. To book a fishing charter based out of Fort Lauderdale, contact Capt. Dave Zsak at 954-439-8106 for availability and what’s biting.